Who Saw That Coming?

A long time ago, a solar eclipse was seen as a portent of doom, you know. Oh, yes. The religious, who claim they have revealed knowledge through divine revelation and prophecy were always taken unawares when some astronomical event happened. Within the last 24 hours it was a solar eclipse that happened, but it was predicted by science, not revelation.

Maybe we are making some progress, in a way. We don’t experience a mass panic nowadays when the sky darkens and the Sun is blotted out temporarily for reasons that science can explain, but historically, the religious could not explain, except by invoking a non-existent angry deity. Solar and Lunar eclipses are predicted with precision to the exact second for centuries to come, not by religious insight, but by physics.

Here is my own (barely significant) contribution to scientific observation of the universe: one of the photographs I took of the eclipse: 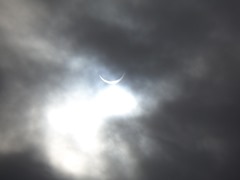 I had expected that if the sky had been clear then I would have used my home-made pinhole projector to watch it happen (as I did in 1999 when the last eclipse around here happened), but cloudy skies prevented that. Maybe it was better for me that observing conditions weren’t “perfect,” otherwise I wouldn’t have a permanent record of the eclipse. So there you have it.