A Welcome To My New Readers 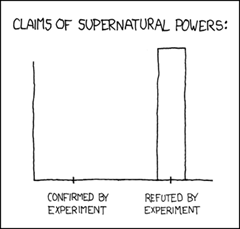 I’ve had a sudden spike in page views on the Bad Thinking blog since last Thursday (26th March 2015). That was the day I was featured in the Shields Gazette in Mike Hallowell’s Wraithscape column.

It’s the second time Mike has featured me in the Gazette, moaning that I have criticised his writings. At least he quoted the address for the blog, and it looks like some people have taken the trouble to manually type it into their web browsers to have a look. Unfortunately, his article has not been published online, so I can’t reply to him there. And readers therefore can’t visit here with a simple click, so my thanks to those who have been intrigued enough to come along.

It’s a pity I wasn’t allowed a right to reply; after all, Mike turns up here regularly to reply to anything I have to say about what he writes. Not to worry, though. There is plenty of blog fodder in his article, which I will deal with here in due course.

In the meantime, new readers who want an antidote to woo in general are welcome to peruse the articles I publish if they want to sharpen up their critical thinking skills. If you want to criticise anything I write, that’s fine: I don’t get upset or paranoid about it.

4 responses to “A Welcome To My New Readers”